Okay, so, when I started this blog, I had great plans for it. I started dictating entries on my phone as recordings, intending to type them up later. I got overly dramatic with them, and fully involved in florid phrasing and such. But then, I could never find the time to actually sit down and transcribe them. Consequently, since I was trying to tell backstory and make this blog somewhat logical in its ordering, I refused to let myself just open up a draft and start writing an entry.

I am (at the time I started writing this post, at least) in bed, supposedly sleeping, but mostly avoiding my husband and stepdaughter, simply because I want to avoid my husband. Well, and because I’m having a hellova time holding my head upright, so lying down is rather nice. And they’re watching TV while they bake a cake and talk noisily, and my head just can’t take it.

Y’know, I can’t really blame the Grinch for attempting what he was trying to do.

And this neck pain? That’s a recent thing. That didn’t even factor into things when I came up with this “Life in Pain and Perfidy” title. I also didn’t know, at the time, that “Pain and Perfidy” was a phrase that had been thrown around a time or two in the past. But I’m not surprised it has been – it’s catchy, I think.

Anyway, the neck pain. Car accident. Rear-ended. Silly chit decided to just drive forward when she thought the light should turn green, despite the fact that it was still red. She hits me, I hit him. My car is the only one with damages, I’m the only one that suffers an injury.

Okay, so, Pain and Perfidy. How about Pain? 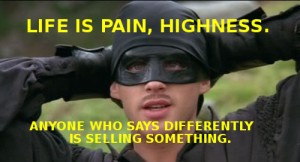 William Goldman knew where it was at.

I live in pain – physical pain, emotional pain. A few ailments plague me. One of these is depression (specifically, bipolar disorder and anxiety issues), which is no surprise, given that I’m sitting here (attempt #2 to finish this post), writing a blog that is basically bitching about stuff, but I’ve been dealing with the depression for 17 years, more actively for the last 10. The physical pain is mostly in the form of fibromyalgia, a never-ending aching pain that can often leave me completely physically incapacitated, such that I am unable to get out of bed. If I am able to get out of bed, it takes me two to three minutes to walk down one flight of stairs to get to the kitchen, so I can make breakfast or just get a cup of coffee. It actually takes less time to ascend the stairs.

Don’t get me wrong. Most days, I seem to be a Perfectly Normal, Fully-Functioning Human Female. I might move a little more slowly than most, or with perhaps more deliberation. I might not always be up for being sociable, but most would attribute that to me being just another introvert in an asocial mood.

But that’s not the case.

I long for a day, just one day, where I could be pain- and depression-free. Or even just free of one of those.

It’s that too much to ask for?

Apparently yes, because that’s what I’ve been asking for for every Christmas and birthday, on every found penny and shooting star, at every wishing well and on every candle I’ve extinguished, for half of my life.

This is attempt #4 to write this one simple post because I’ve been in too much pain to do it in one sitting. I promise, this blog won’t be me bitching about how much I hurt, but I just wanted to give you an idea of what I’m dealing with. This is what I live with. This is what I hide, every day. So, if I’m bitching, it’s because it’s particularly bad that day.

It’s been particularly bad since the accident, and getting worse daily.

But the Perfidy is the fun stuff. And I’ll start getting to that… next time I write. 😉

This blog isn’t for you, this blog is for me. This blog is for me to get my thoughts out in a coherent form, in an attempt to perhaps make some sense of what’s going on, and, perhaps, figure out how best to proceed from this point going forward. Some of these blog entries will be written while sitting at the computer, in stream-of-consciousness format, simply sitting down and writing what comes to mind. Some of these will be thought out ahead of time. Perhaps I will think of a topic, take notes, and write it as though one would write an essay, with a coherent beginning, middle, and end. Even my stream-of-consciousness essays may have a beginning, middle, and end, because that’s the way I tend to think. Some may be written in bed while incapacitated and in pain, unable to move. Some may be “written” while in the car, dictated over a microphone, as this one is, then later transcribed, when I have a chance to sit down and type it out. (Those last might have a different timbre, since you’d think my speaking voice is different from my writing voice, but really, they’re not much different when I know they’re words I’m intending to put to paper.)

The friend who specifically recommended I start a blog, this time, has her own serious travails to go through these days, and she has started a blog of her own and finds it beneficial. I have, many times before, been recommended to start a journal or blog in order to write out my thoughts, to narrate what’s going on in my life, to put my thoughts in order. And of course, such people who tell me to keep a journal tell me that I should just write down what comes to mind. It need not make sense. It need not have any structure or order. I need not put it online nor even save it as a document on my computer. If I write it out, I may shred the pieces of paper and throw them away so there need not be any written record. (I realize at this point that saying “need not” this many times in a row sounds rather silly, but I think I’ll keep it in there, so you have an idea of *chuckle* how I speak, even when I’m simply speaking aloud to a recording device for later transcription.)

But those people don’t know me, or at least, they don’t understand me when it comes to the way I process my thoughts. To me, if no one reads it, or if there is no chance someone will read it, there is no purpose in writing. I can never write simply for my own benefit – there must be someone who can read it. And if I publish this blog and not a single person reads it, that’s fine. The point is, it’s out there, to be viewed, and it’s not hidden away where no one can see. If I write things out and I keep them stored where no one can find them, why write them out in the first place? That’s how it works in my brain as regards to me, at least – I know that’s not how it is for everyone.

So I am grateful that you, you, are here reading this, because you’ve entirely validated me writing this, here, now. I don’t need to know you are here; it’s enough to believe that you’ll have gotten here someday. As with other things, I cannot perform unless it is for someone else’s benefit (and yes, that is an important statement, which I will be sure to revisit in the future), so I’m glad you’re here.

That which has come before

Join 4 other subscribers
Follow Life in Pain and Perfidy on WordPress.com